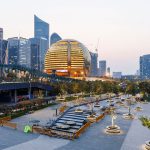 After over a month of our arrival to Tianjin, we were very excited to have a “spring break” to travel around the country and experience different things. During Fall in China, there is a “spring break” called Golden Week. This special week is a national holiday created to promote and increase domestic tourism and to celebrate China’s National Day. This year, it was the 70th anniversary of the People’s Republic of China and there were many events before and during the week.

Since it is a national holiday, we didn’t have class, so we were able to explore a little more of our host country. Moreover, China is one of the biggest countries in the world, and in order to explore as much as we could during the week, me and two friends decided to go to a different city each day. In total, we had 11 days of traveling and 8 cities, we took more than 8 trains, 5 flights, many bike and metro rides to move around, and no time to sleep.

The trip was worth it and we had the opportunity to see different unique things that only China has like the Terracotta Warriors, the Sun and Moon Temple, Pagodas, pandas, the second tallest building in the world (Shanghai Tower), one of the most important rivers for trading (Li River), and the happiest place on earth, Shanghai Disney Resort. In addition, we stayed at a luxury hotel in Shanghai (the Hongta Hotel), and we did a tour of one of the most iconic hotels in the south of China, the Intercontinental Hangzhou. It is a sphere-shaped hotel that represents the sun and attracts the energy from the river and brings it to the city to bring success.  Nowadays, Hangzhou is one of the fastest-growing cities in the world and many people believe it is because of their innovation and “feng shui” (how everything is placed in order to attract and let good energy flow).

In conclusion, this week was kind of a field trip where we learned a lot about the Chinese perspective of life, architecture, and hospitality in different cities.