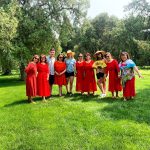 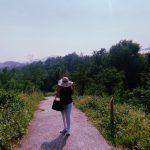 Trying to be a local in a country where you do not understand the language and you are starting to learn the culture, is not an easy task. Hotpot, metro, VPN, local parks, getting lost, didi, taxi drivers, bullet trains, 13 hrs of sun, pictures with strangers ,and much more can truly sum up what I have experienced my first month in China. Let me explain…

Food: It has been amazing. Like any other country, even though they have different mixtures of plates, its all the same food and has the same taste to it. It is really good, just hard to order since they do not understand me and all the foods and condiments are the same therefor they taste THE SAME. This is not a bad thing, it is very delicious; it just gets a little tiring. I have found local restaurants specially in the cities we have visited (Beijing, Dalian & Panjin) that have their own city spin to the food.

Transportation: We started using didi’s (China’s version of Uber or Lyft) since it is simple to order a car; just plug in both addresses and you don’t have to try and explain to the driver where to go. But we quickly realized distances are not short, and even though each rides are $3-$8 max it adds up pretty fast. Additionally, when trying to get a didi before 7am or after 11pm, since the side gates are closed, the drivers do not understand that they must go to the main gate and that has also been an issue.

We started asking our new classmates how to use the metro and it was not as hard as we thought it would be. Now we are all set to use the metro ALL around China and have all the maps downloaded to our phones.  This way we will no longer spend on unnecessary didi’s or waste time with confused drivers. It is truly a win-win situation even though, some drivers have really tried to communicate with us.

One of our weekend trips was to Dalian, a small city on the coast. This is not a very touristy city, meaning that when the driver picked us up she was excited to meet us and started talking to us with an amazing app. We were told prior to our trip to download google translate, but it does not work unless we have wifi, so we can not always use it. BUT, this driver showed us this amazing app that has alleviated the communication with locals that do not speak English!

Travel:  Traveling like a local in China is a very easy task actually. We have stated to do our research, and every time we are looking for a place to go or even eat, we first look at Chinese webpages not only travel pages. In Dalian, as we were talking to the didi driver, she recommended this amazing ranch which we visited and spent the day like locals. It was an amazing experience; it was amazing sceneries and beautiful people all around.

We saw more than just the ranch in the middle of nowhere. As we were leaving there was no way of going back to the city, for we were in the middle of the woods; only public transportation was available. Without really knowing what we were doing, we hopped on the bus and tried talking to the driver to explain where we were going. He actually understood us and told us what stop would be closest to our hotel. We were truly living in a local’s shoes. Not only was this mini adventure in Dalian, but a week later we visited Panjin to go to one of Chinas local attractions, The Red Beach.

We bought a same day ticket on a regular train, giving us 6 hours of fun on a train bed. We slept Saturday night on the train bed, which was truly an experience. We arrived Sunday to the best tour guide ever.

We spent the day in Panjin, thinking we would only visit the Red Beach and go back home that same night. Little did we know that we would fall in love with the best hot spring in China. Our tour guide took us to a hot spring that gives you 24-hour access for only 140 RMB (just over $20) — it even offered a room to sleep and a movie theater. It was truly a place we are looking forward to going back to.

All these places were local recommendations and ended up being the best places we have ever been. Tourist locations are overrated, BUT, still fun! I can not deny that the temples and palaces we have visited so far in these 4 cities have not been extremely amazing and breath taking. Just a little too main stream for my taste. Street food and crazy adventures are more my forte.

Dalian, Beijing, Tianjin, and Panjin have been the cities we have visited so far, where we have experienced local custom and local food. We have been in China less than a month and already understand so much about them. I’m truly looking forward to visiting more of China in the upcoming weeks and knowing everything there is to know about the culture, for each thing we learn is more amazing than the previous.

For Daily recaps or live stories please visit my IG blog to get a closer view of our daily adventures and fun the oriental way: @travelingwithAngelica.